What happens to me in Spain if my country leaves the European Union?

According to the Royal Decree 240/2007, of February 16, on the entry, free movement and residency in Spain of citizens of the Member States of the European Union and other States parties to the Agreement on the European Economic Area and its application by the Order PRE / 1490/2012, of July 9, in article 1, it says:

It means that all EU citizens can opt for the residency registration in Spain after 3 months if they meet the conditions provided by law, as we mentioned in the post Should I become a resident in Spain? long time ago. As we should know at this point, you would need to be a pensioner, a worker in Spain or having enough incomes/savings to be get this residency done.

But what concerns us today is the consequences consequences of becoming a non-EU citizen being an EU resident in Spain.

Can my country leave the European Union?

Yes it can. And the reason is the withdrawal from the European Union:

Withdrawal from the European Union is the legal and political process whereby an EU member state ceases to be a member of the Union. Article 50 of the Treaty on European Union (TEU) states that “Any Member State may decide to withdraw from the Union in accordance with its own constitutional requirements”.
As of November 2019, no member state has withdrawn from the EU (or the EC); however, the Government of the United Kingdom triggered Article 50 to begin the UK’s withdrawal from the EU in March 2017 following a referendum, and the withdrawal was scheduled in law to occur on 29 March 2019. Subsequently, the UK sought and was granted extensions to delay the exit date to 31 January 2020.

It has already happened

Three territories of EU member states have withdrawn: French Algeria (in 1962, upon independence), Greenland (in 1985, following a referendum) and Saint Barthélemy (in 2012), the latter two becoming Overseas Countries and Territories of the European Union.

THE CONSECUENCES FOR EXPATS LIVING IN SPAIN

The results for an EU expat whose country of citizenship leaves the European Union will depend on the expat situation in Spain:

Situation 1: leaving in Spain as a permanent resident

If in the moment of the official withdrawal, the EU expat is a permanent resident in Spain, rest assured.

According to EU laws, as an EU national(or a national of Iceland, Liechtenstein or Norway), you automatically acquire the right of permanent residence in another EU country if you have lived there legally for a continuous period of 5 years.  If you fulfil this requirement, you can apply for a permanent residence document, which confirms your right to live in the country where you now live permanently, without any conditions.

According to the Spanish laws, the citizens of a Member State of the European Union or of a State party to the Agreement on the European Economic Area, and family members who are not nationals of one of those States, who have legally resided in Spain for a continuous period of five years. So, the same as mentioned above from the EU laws, of course. 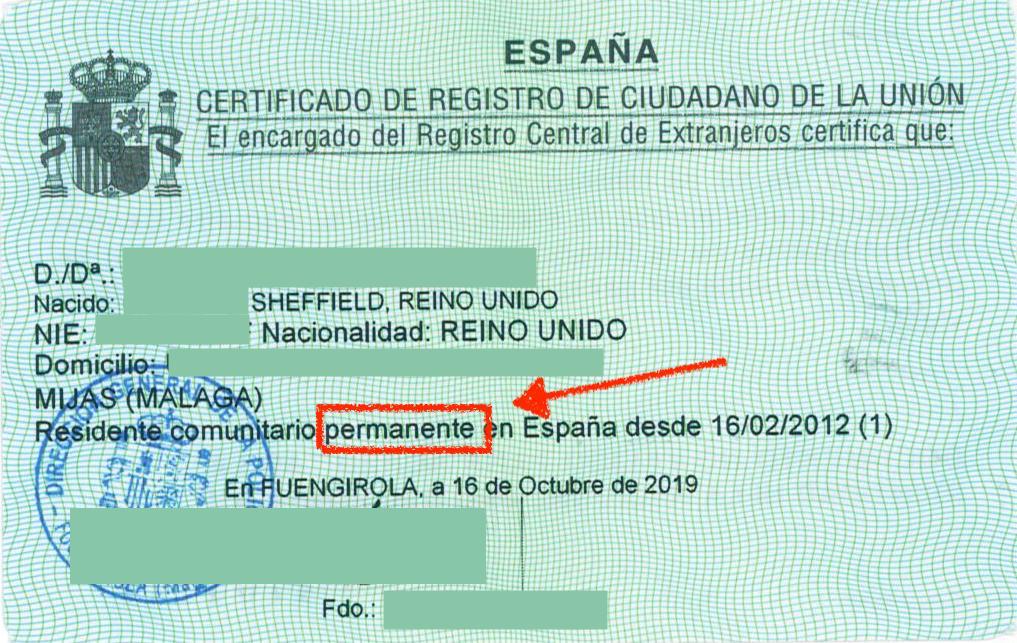 Situation 2: leaving in Spain as a resident (still non-permanent)

If you hold a standard residency certificate (as bellow but without the word “permanente”), the situation is different. The consequences will depend on what Spanish authorities would decide once your country leaves the EU.

For instance, the Spanish Government delivered a statement confirming that Spain would provide a residence permit for all British citizens holding this certificate in case of Brexit.

Situation 3: leaving in Spain without a certificate of residency

Taking into account that nobody can be sure what the current consequences would be if an European country leaves the EU, we can only expose what the situation would be as a non-EU citizen living in or planning to live in Spain.

Accordingly, here you have a visa to Spain list provided by the Spanish authorities so far:

What types of VISA can I apply for?

And here you have a residence permits to Spain list provided by the Spanish authorities so far:

What types of RESIDENT PERMITS in Spain can I apply for?

New Residence Card for British Citizens in Spain (with picture)

Non-Lucrative Visa for Spain: the most usual visa when you don’t have family members in Spain

The no-lucrative visa is the most common type of visa for those people who have enough incomes or savings to live in Spain (according to the current Spanish laws), don’t want to make any business in Spain and don’t have any family member in Spain. The most frequent type of visa is the family reunification […]

Do I have to declare taxes in Spain?

CONTRIBUTORS WHO HAS TO DECLARE TAXES IN SPAIN (Article 96  Income Tax Act) In general, IRPF (Personal Income Tax) taxpayers are obliged to present and sign a declaration for this Tax, with the limits and conditions regularly established. Before going deeper, we need to understand the following terminology: Who has no obligation to submit annual […]